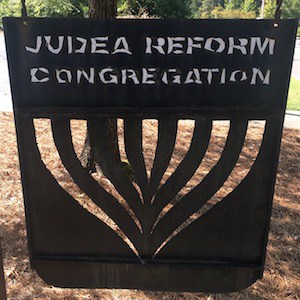 On December 13, 2018, Judea Reform Congregation (JRC) announced that President Ziva Raney, Rabbi (Interim) John Franken, and the Board of Trustees sent a letter to the Durham Human Relations Commission (HRC) in support of its draft report.

Judea Reform is the largest congregation in the North Carolina Triangle area with approximately 600 family memberships. Dr. Robert Gutman, co-chair of Voice4Israel and former Judea Reform member, responded, “The community has united in this cause in a beautiful fashion and with clarity of purpose. And now we have the largest Congregation taking a firm stance. Thank you.”

After thanking the HRC for its “thorough and thoughtful report,” The JRC letter stated, “It is our hope that the full HRC, and subsequently the City Council, will adopt the recommendations of your subcommittee as submitted, especially the rewrite of the Council Statement that omits the unnecessary and disruptive reference to the State of Israel. These recommendations go a long way to correcting misinformation and the pain felt by many in the Jewish community.” Read the full JRC letter here.

Judea Reform Members Embrace Their Synagogue’s Letter to the HRC

Larry H. Rocamora told Voice4Israel, “I am President of the Durham-Chapel Hill Jewish Federation and a past President of Judea Reform Congregation. I am proud of my Congregation coming out in support of the draft HRC report and recommending the removal of Israel from the April 16 statement. Singling out Israel served no purpose in furthering Durham City Council business and has led to hurtful rhetoric that is painful to the Jewish community and makes many of us feel unwelcome in the city where we live.”

Ethan Hertz shared with Voice4Israel, “As a member of Judea Reform Congregation for almost three decades, and as someone who has served JRC in a variety of capacities, including as a Vice President, and as someone who knows the Durham Police well, having served on Durham’s Civilian Police Review Board for nine years, I am delighted that JRC’s President, Rabbi and Board joined other area congregations and our local Federation in asking the Durham Human Relations Commission to adopt its subcommittee’s draft report related to the City Council’s resolution on police training and Israel. This unfortunate resolution implies that there is a linkage between Israel, Jews and police misconduct. Nothing could be further from the truth.”

Mark Rodin, a 38 year member of Judea Reform, shared with Voice4Israel, “I am pleased Rabbi Franken and our board support it, and hopefully the full commission will approve the reference to Israel be taken out of the City Council’s April 16 statement.”

“Collectively, we need to check our American privilege at the door since Palestinian rockets aren’t being fired at our own homes, and the leadership at Judea Reform get this, as they have publicly supported the terrific work of the Durham Human Relations Commission on the anti-Israel resolution,” said Durham resident and Judea Reform member Kathryn Wolf. “It’s so imperative that our Jewish leaders stand up to anti-Semitism in all its forms, whether it comes from the Right or the Left.”

Peter Reitzes, a five year member of JRC, stated, “I am proud of Judea Reform for encouraging the HRC to approve its draft report and for encouraging the Durham City Council to accept the recommendations.” Reitzes added, “When Mayor Steve Schewel spoke at JRC in October, he stubbornly and repeatedly refused to revisit the April 16 statement. Hopefully that will change now.”

Dr. Stanley Robboy, a former Judea Reform member and more recently co-president of the Kehillah Synagogue shared, “I am proud that the three area synagogues (Beth El, Judea Reform and Kehillah) and 12 of the area rabbis all have denounced the ill-conceived statement. I am also proud that the Durham Human Relations subcommittee has drafted a report (to be voted upon at it Jan 8, 2019 meeting) that will tell the City Council it should remove the word Israel while amending the statement in many areas to improve its over all content. We all strongly support its adoption.”