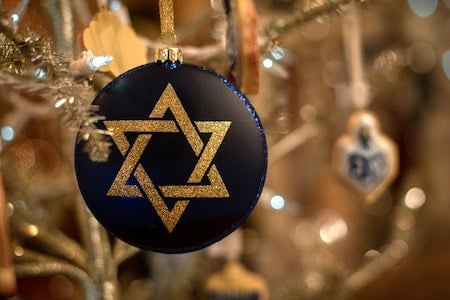 A Voice4Israel subscriber wrote us to ask: “Is this really a good thing? I am absolutely 1000% supportive of ending any and all antisemitism. But, the memories and events of the Holocaust remind me of how Judaism was called a race and this race was to be extinguished. So I am conflicted. Thanks.”

Thank you so much for your thoughtful reply and question.

We at Voice4Israel applaud this recent executive order to oppose antisemitism particularly on campus.

I understand that calling Jews a race triggers great concern, but this Executive Order does not do so. As the ADL explains:

“The White House’s order does not define Jews as a race, but it does identify Jewish Americans as a protected class who, like other minority students on campus, should not be subjected to harassment, intimidation and discrimination.”

Thus, this decision is based on the conclusion that the Jews in addition to practicing a religion, together constitute a people. We believe that this is an unassailable and self-evident truth. Connection to our peoplehood is an essential part of our tradition, whether one is a religiously practicing Jew or an atheist.

Admittedly it is absolutely true that as Americans, some Jews have historically been fearful of such an identity. To them, the idea that we were just Americans of the Jewish religion, was felt to be a safer designation. But that approach has been largely discarded due to historical experience in the last 100 years; specifically in light of American Jewry’s ambiguous/muted support for the much needed Jewish homeland and its rather tepid response to the evils of Nazi Germany.

Additionally, it is our feeling that although antisemitism has a multitude of manifestations, its most potent and dangerous aspects in modern times, have not been directed at Judaism as a religion but at Jews as people accused of a myriad of malign attributes. In recognizing the reality of the peoplehood nature of Jews, this executive order allows for hatred directed at us as a people to be more effectively combatted.

To shirk away from our affiliation as a people would only give ground to the anti-Semites and would not serve to protect us. Personally I am not a showy Jew, but I do believe we should embrace and stand tall in our identity. Furthermore, we should cherish and strive to uphold our highest values. That is not sufficient to end the scourge of antisemitism, but it will stymy its intentions and not incidentally enrich our own lives. By being true to our particularistic interests we also have the opportunity to further our universalistic ideals. That is to the benefit of us all Jew and Gentile alike.

Again thank you for your engagement with these issues.

Thank You Response from Subscriber

Voice4Israel received this wonderful response from the subscriber.

Thanks for your thoughtful reply.

I have read the ADL message and of course yours.

I now feel much better about the [Executive Order] EO and will embrace it.

The news media slanted it so this is why I was concerned.