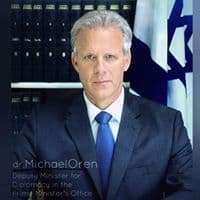 The Most Realistic Peace Plan Since 1993

The Two Nice Jewish Boys podcast, in collaboration with the Jewish Journal, interviewed Dr. Michael Oren about the newly released White House peace plan. Oren, a former member of the Israeli Knesset and Israeli Ambassador to the United States, is a well-respected historian who has been intimately involved in the peace process since 1993 when he was an advisor to Prime Minister Yitzhak Rabin during the Oslo Accords. Listen to the full interview below.

This summarizes only the first nine minutes of a much longer conversation. Listen to the entire interview with Dr. Michael Oren here.

Voice4Israel advocates love and support of Israel whether it comes from Democrats, Republicans, Independents, Progressives, or others. Voice4Israel is non-partisan. While tensions are high in this country, we hope and ask that all sides — Democrats, Republicans, and everyone else — work together to support a path forward towards peace between Israel and the Palestinians.