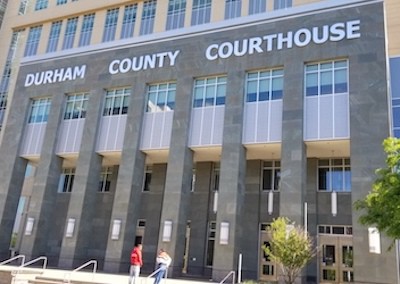 A year ago, on April 16, 2018, the Durham City Council passed the “Israel Resolution” making Durham the first city in the United States to boycott police trainings specifically with Israel. This initiative began on April 5, 2018 when local activists led by the anti-Zionists of Jewish Voice for Peace (JVP) presented a petition to the Council demanding that Durham ban police training specifically with Israel. It took the City Council just 11 days to do so.

Since then, three lawsuits have been filed against Durham on this matter.

One of the lawsuits filed, “Friedman, Deborah vs Durham City Council,” had a hearing today in Durham County Superior Court. Deborah Friedman is a resident of Durham County. Judge Cynthia King Sturgis presided at this morning’s proceedings and three Voice4Israel board members attended.

The suit alleges that the City Council held electronic public meetings without notifying the public, thus being in violation of open meetings law. At the heart of this lawsuit are two emails regarding the Council’s “Israel Resolution” that Mayor Schewel sent from his personal email account to the personal emails accounts of City Council members (Voice4Israel unearthed these emails using public record requests). Each of the two emails consists of a quorum or majority of City Council members. To put it simply, the Council met electronically and privately without public notice.

North Carolina State Law requires advance notice of public meetings. Public meetings, such as City Council meetings, are defined as consisting of a “majority of the members” and specifically include electronic meetings.

The attorney for the City of Durham, Henry W Sappenfield, argued today that the term email correspondence does not meet the law’s language or criteria because it is not usually “simultaneous.” In order to meet the law’s definition he argued, the conversation had to occur with some rapidity whether it be in an in-person conference, telephone conversation, or electronic interaction such as with social media services like Facebook. Sappenfield told the court that he considered emails to be discontinuous in time and therefore not simultaneous.

The lawyer for the plaintiff, Jonathan Jones, argued that the intent of the statue was broader and should include electronic conversations where responses could go back and forth over short periods. He bolstered his argument with several examples. In one example, Jones used an email sent by Mayor Schewel which was unearthed by a Voice4Israel investigation. In the email, Mayor Schewel wrote to the entire Council,  “We can’t ‘meet’ as a group via email outside of the sight of the public and press, and I think that’s a good law and practice. But we can correspond in two’s and three’s–fewer than a quorum.”

A second example, which was also unearthed by Voice4Israel, was related to Jordan Peterson performing at the Durham Performing Arts Center (DPAC). In this example, the entire Durham City Council corresponded via email to draft and sign a statement opposing Peterson that was not officiated at a formal, publicly announced meeting of the Durham City Council. This occurred even after the mayor had already said they are not supposed to meet via email.

Both plaintiff and defense lawyers agreed there was little case law about the issue in question.

The most compelling argument presented was the potential consequences of the judge’s forthcoming ruling and why. If the Judge were to summarily dismiss the lawsuit, this would allow City Council members in this judicial region to adopt the practice of meeting electronically to conduct various types of city business in ways hidden from the public and thus injurious to the public. Ruling in favor of the plaintiff would discourage or prevent any City Council from backhanded maneuvers to conduct City business in private, thus reducing the chance of decisions being made in secret without public awareness and without public feedback.

The judge is taking the arguments under advisement. She will announce her results at some future time. We await the judge’s decision.