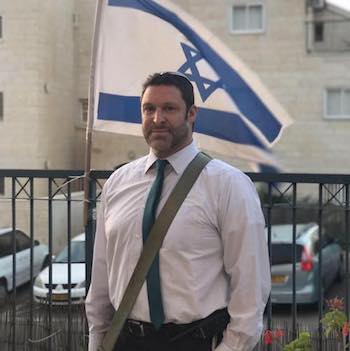 May His Memory Be a Blessing

Ari Fuld, beloved father and advocate for Israel, was murdered in a terror attack. Fuld was assistant director of Standing Together, an organization that supports Israeli Defense Forces (IDF) soldiers. The Jerusalem Post reports, “Fuld was a father of four and a dual US-Israeli citizen. He served as a sergeant in an elite paratroopers unit in the IDF reserves and also served on the Efrat emergency squad.”

Fuld was at the entrance of a shopping mall near Gush Etzion Junction when he was stabbed by a 17 year old. Fuld shot the terror suspect before being taken to the hospital where he succumbed to his wounds on Sunday (today).

Fuld in the Triangle

Fuld visited the Triangle in 2016. Many of us had the pleasure of meeting Fuld when he spoke at a packed event in Chapel Hill. Unfortunately, because Fuld was Israeli, security at the event was an important consideration. 4-5 local police officers volunteered that night to insure the event was safe for all.

Fuld was warm, friendly, and passionate in his love of Israel and love of those who protect Israel. He spoke of a future living in peace with his Palestinian neighbors. Fuld was raising money so that Israeli soldiers could have better clothing and much needed supplies. Fuld spoke of sacrifice – of dangerous assignments so that the families at home would be safe from terror.

When an audience member asked Fuld about “self hating Jews,” Fuld was thoughtful and shared that he did not like the term. Fuld disagreed in a way that persuaded the audience and did not alienate – a rare gift. Fuld encouraged a strong and compassionate Israel and respectful dialogue.

When asked about the Boycott, Divestment, Sanctions (BDS) movement against Israel, Fuld described a strong and determined Israel, always willing to negotiate. His confidence suggested that BDS was not a threat to Israel. Some of us in the audience disagreed on this point, but we also knew that by living in the United States we have a much different experience on these issues.

Saying Goodbye
This morning I visited Fuld’s Facebook page. It was then I saw that after briefly meeting Fuld in 2016, he took the time to send me a friend request. I never saw it until today. I accepted Fuld’s friend request with deep sadness for his family and pride in knowing that Fuld represented Israel and Jews with love, strength, and compassion.
May his memory be a blessing.

by Peter Reitzes, a Voice4Israel board member.