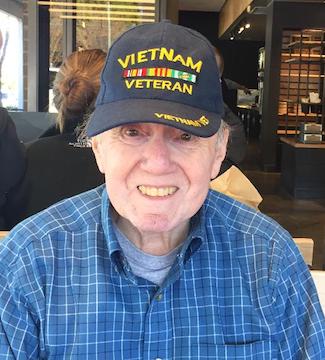 Voice4Israel thanks our brave veterans for all they have done to protect the United States and world. Today we feature and honor veteran Joel Freelander of Chapel Hill. Joel is known for his generosity, volunteer work and love of family, Judaism, the United States, Israel, and much more.

"Not all military bases have rabbis. In my later years I became a Jewish Lay leader, filling in for the lack of a rabbi. This was a great experience as I worked with numerous leaders of many other religions and learned how to understand some of the differences that we all have."

Mr. Freelander, thank you for your service. Please share with us when and where you served.

What makes you proud about your service and the United States military?

My father and his family came from Russia to Lithuania, and here to the USA. My father’s younger brother served in WWII, and my father constantly told me about his family’s travels coming here, and what a wonderful country we had and how lucky we were with all of the opportunity and freedoms that we have here.

Tell us about your volunteer work now with the military.

My volunteer work has been with the United Service Organizeations (USO) and the Marines. That has been very rewarding to me as these young people in many ways have never been away from home. Through the USO we offer them emotional support and show them a warm face and positive ideas as to what they may see in the future.

When active members of the military land back in the United States, what are some of the things they miss and they tell you?

They have missed their families and loved ones, the meals and food here, and they miss their friends and the ability to either get an education or pursue their profession. Their overall comments are, “There is no place like the good old USA.”

What is something about serving in the military that some people may not know?

Many people do not really understand an 18 or 19 year old being on their own for the first time. Being away from family and friends AND starting all over – learning how to make their money last, how to try to save some of it – the responsibilities of so much that is theirs so quickly – how to make decisions, to prioritize, and also about going further with their education. Life is thrown at them quickly before they really understand what is happening.

What was your experience like being Jewish in the military?

Being a jewish person in the military is a rare breed. Not all military bases have rabbis. In my later years I became a Jewish Lay leader, filling in for the lack of a rabbi. This was a great experience as I worked with numerous leaders of many other religions and learned how to understand some of the differences that we all have.

You recently donated an American Flag to your synagogue. Why is that important to you?

I was delighted to donate an American Flag to my place of worship. I am a very proud American and a very proud Jewish man. The American and Israeli flags to me, should be a part of every religious house of worship. The reasons are simple. To show a positive strength and a faithfulness to the USA, and to Israel, for we have been able to have so many opportunities to benefit not only ourselves, but our families and so many other people all over the world. We should be very proud of being citizens of the United States of America, and of being Jewish, and again helping people and countries all over this world.

You are a proud supporter of the United States and of Israel. Why is Israel important to you?

I am also a firm believer in what has been accomplished by this country as well as Israel to help the entire world. My firm belief is that no country is perfect – no person is either. Yet I look back as a young person growing up, and watching how many people and countries that have been helped by us and Israel in so many ways. How many people know that the tiny country of Israel has helped to save our planet by at least 65 different ways. and that Israel and it’s people have invented over 45 of the greatest inventions of all time. These are facts! Look at the number of immigrants that have come here and made this country great. We have opened our doors to so many. Israel has made more contributions to this planet and people without ever asking for anything in return. Look at how the Israeli doctors and nurses have gone all over the world to help people in distress, including many of the countries that have fought against Israel. This is one of the greatest countries on Earth while being one of the smallest democracies. The world needs to praise and thank her many times over.