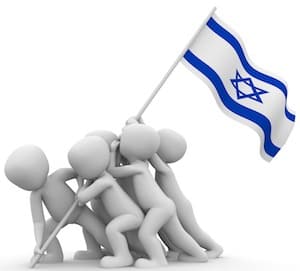 On April 16, 2018, Durham, North Carolina became the first city in the country to boycott police trainings specifically with Israel. Since then, two lawsuits have been filed against Durham on this matter. Now a third complaint, released March 8, is being prepared by the North Carolina Coalition for Israel (NCCI).

This third legal complaint goes directly to the issue of anti-Semitism in a manner echoing this important talk to the House of Representatives by Congressman Ted Deutch (D-Fla) making clear that “It should not be this hard” to condemn this scourge. We thank the North Carolina Coalition for Israel.

Read the press release below.

The North Carolina Coalition for Israel will be joined by Kathryn Wolf, Rabbi Jerome Fox and Perri Shalom-Liberty as Plaintiffs.

Counsel for Plaintiffs are Clifford A. Rieders of Rieders, Travis, Humphrey, Waters & Dohrmann, and D. J. O’Brien of Brooks Pierce.

In keeping with the Coalition’s reputation for integrity, the Complaint has been sent by its attorneys to Kimberly Rehberg,City Attorney, for review prior to filing and in order to determine whether any resolution is possible prior to formal litigation occurring.

The lengthy and detailed Complaint explains the manner in which the Plaintiffs and Jewish community in the City of Durham have been discriminated against based upon religion and nationality due to the conduct of the Defendants, including but not limited to the City of Durham, North Carolina.

The pleading to be filed with the Court, if the matter cannot be resolved, details how Mayor Steve Schewel, City Council and others, demonized the Jewish community in stereotypical anti-Semitic fashion by making false and highly misleading claims about the State of Israel and its police training programs.

The City of Durham, through its elected officials, disregarded Durham Police Chief Cerelyn Davis’s endorsement of the Israel Exchange program in which she said that she was never instructed on methods to oppress Palestinian Arabs or any other group.  Nevertheless, City officials passed a “statement” which was knowingly false, claiming that Israel was a source of “militarized policing” and thus prohibited any future involvement in the Israel program.  None had ever been planned.

The attorneys explained in their correspondence to the city attorney that the city and the rest of the Defendants would be given 30 days to determine if there is any serious interest in prefiling negotiations.  Thereafter, the Complaint will be filed with the federal court, and litigation will ensue.

Editor’s note: The title of this post, “I am not a Jew with Trembling Knees” was taken from a Menachem Begin quote featured in the NCCI announcement of this complaint.